I am a sucker for the one-two-punch of a singing-cowboy, and last night I was watching (my five-year-old grandson watched with me) The Hills of Utah, 1951, and as I always am, I was fully entertained by the king of the warbling-western: Gene Autry (my grandson loves Autry).

Of course, Autry portrays a man of integrity, honor, choosing to do what is right, even while incurring negative results; the true White-Hat-Cowboy (white as in righteous, for sometimes the good-guy wore black: Hopalong Cassidy, William Boyd portrayed Hoppy).

Autry had his film debut in, In Old Santa Fe, 1934 and in the same year, he appeared uncredited in the twelve-chapter western serial, Mystery Mountain, starring Ken Maynard. After that, Gene Autry would star in over ninety movies in the next eighteen years. Our roving-ranger was not an unknown when he came to moving-pictures, but an established radio star and recording artist. Hollywood needed Gene Autry as much as Autry required Tinsel-Town.

The silver-screen featured several singing-cowboys of note, including… Roy Rogers, Tex Ritter, Eddie Dean, Monte Hale, Smiley Burnette, and let us not forget to mention at least two of the singing-cowgirls, Dale Evans and Dorothy Page. 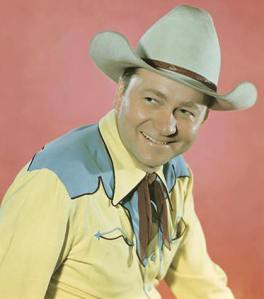 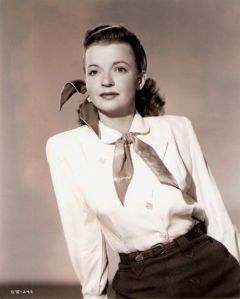 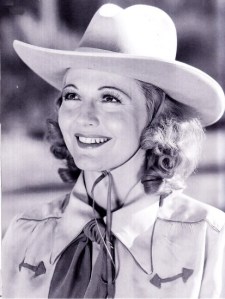 I will leave off now for today is my birthday, this subject is too large for this day, but I will return soon and often to this deep-well of the musical-western, as well as the great B-westerns, remembering those men and women of yesteryear, who taught us not to cuss, not to drink anything other than a soft-drink, milk or lemonade, not to smoke, not to steal, to show respect to our elders and to obey our mom and pop. And frequently along the way we were treated to a song or two, as with The Hills of Utah, which featured Autry singing Here Comes Peter Cottontail, and as I saw the glee on my grandson’s face at the tuneful ditty, I was reminded, that, this is the magic and wonder of the singing-cowboy. On the one hand able to stand up for what is right and on the other, sing us happy and make our hearts light. Hills of Utah, is available along with four (The Cowboy and the Indians, 1949, The Blazing Sun, 1950, and On Top of Old Smoky, 1953) more titles on DVD in the Gene Autry Collection 2; if you love these old westerns give Western Clippings a look, enjoy…