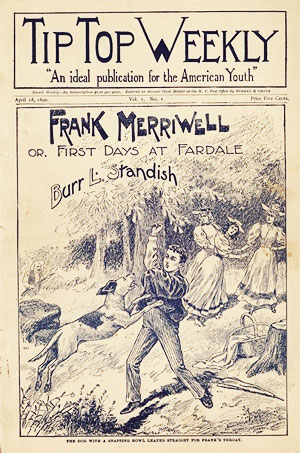 Our story begins in 1971 in Hilversum, Netherlands, a city about twenty-miles south-east of Amsterdam; a municipality of less 100,000. Hilversum is often referred to as “media city,” because it is the principal capital of radio and television broadcasting in the Netherlands. It was in ‘71 that a private collection of around twenty-films from the period of 1910-1925 was moved from Hilversum to Amsterdam and the EYE Film Institute. That collection is made up primarily of German, French and Italian movies, with just a couple of American films; one of those US films was a nitrate print of, Frank Merriwell in Arizona or The Mystery Mine. The nitrate was scanned in 1998 into Standard Definition. EYE still holds the nitrate print and reports that the length is 503-meters or about 1,650-feet; there are no other elements of film preservation at the EYE for the Frank Merriwell movie. It is the SD copy that is available online and is in remarkably good condition.

At the apex of the “Dime Novel,” a hero of boys was born, a righter-of-wrongs, doer-of-good-deeds, a master of sports, and world traveler: Frank Merriwell. His creator was Burt L. Standish the pen-name of Gilbert Patten, and Merriwell was seen in the pages of, Tip Top Weekly (published by Street & Smith), beginning in 1896; some twelve-hundred Merriwell stories appeared in print, each containing around 20,000 words.[1] By the mid 1930’s the total number of copies of Frank Merriwell stories sold had reached over 120,000,000.[2]

The Making of an Icon:

The Frank Merriwell comic strip began in 1928 and lasted for about eight years in a daily strip; the Big Little Books publishing of the Merriwell exploits were reprints from the daily comic strip. 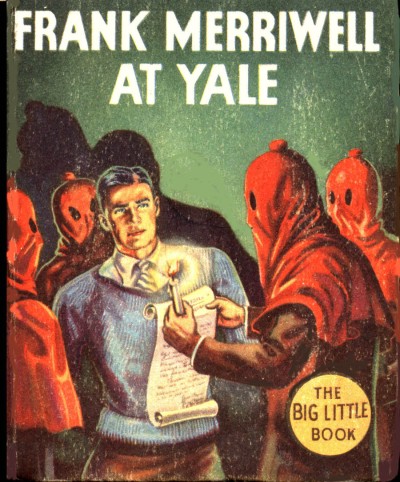 The character made his obligatory mark in radio in the 1930’s and 40’s, on NBC; Donald Briggs handled the character of Merriwell in 1934 rendition, while Lawson Zerbe portrayed Merriwell in the 1946-49 incarnation.

1936 saw the 12 chapter cliffhanger serial for the cinema (The Adventures of Frank Merriwell) starring Donald Briggs. The chapter-play was produced by Universal and co-starred Jean Rogers, Carla Laemmle and John ‘Dusty’ King; directed by Clifford Smith, with the script by George H. Plympton, Ella O’Neill, Maurice Geraghty and Basil Dickey.

So widespread was the character of Merriwell that his name became part of the popular-lexicon, used in sports to describe last minute heroics. Some examples of the popularity of the Merriwell description are: “It was the sixth straight victory for the home team and ended in a regular Frank Merriwell finish;” “The garrison finish of the Giants inspired the Chicago White Sox and the St. Louis Browns to come through with the Frank Merriwell stuff at the last minute.”[3]

In 1971 the Merriwell legend moved to Broadway where, Frank Merriwell or Honor Challenged (starring Larry Ellis as our hero), saw seven-preview performances and premiered on April 24, opening and closing the same day; a miserable epitaph to a marvelous career for this fictional hero. This musical, reinvented Merriwell (book by Skip Redwine, Larry Frank and Heywood Gould; music and lyrics by Redwine and Frank) as a “noble, erstwhile fool,” while the whole of the production was a parody of the era. . Having taken these liberalities with the personas of the 1896 heroic college student and his cohorts, problems with the play, were further exacerbated by the fact that the audience was by now, no longer familiar with the original stories and that the staging was by a group of unknowns.[4]

Words and statements such as “chintzy,” “second-rate campiness,” “a dog,” “empty-headed songs and perfunctory direction and choreography,” “incredibly silly from start to finish,” “an embarrassingly amateurish concoction,” “the book was unfunny and the score dreadful,” “modestly deplorable,” were used to describe this Great White Way offering. With the exception of one or two positive reviews, Honor Challenged, was panned en-masse by the critics.[5]

With all of the attention upon the Frank Merriwell franchise it is difficult to believe that an entire division of the Merriwell history has been missed, yet that is exactly what has happened. In 1912-13, four Frank Merriwell films were produced, three of the features were two-reels in length and were made by Tip Top Films. This reporter assumes that this film production concern was a subsidiary of Street & Smith (considering that the Frank Merriwell stories were published in, Tip Top Weekly Magazine), possibly Tip Top Film was an outreach of the Street & Smith Motion Picture Department.

The responsibility of distribution for the Frank Merriwell series was handled by the Feature Photo Play Company. Feature Photo was itself a new entity, having begun in early 1912 and was putting together a fine stable of film companies to represent.[6] The original plans for the series was to be two films per month, being released on the second and fourth Monday;[7] this plan did not go beyond the first six weeks and three films. The first time all three movies were mentioned together was in, The Moving Picture World, in February of 1913, in an advert by the Prince Feature Film Company; Prince was based in Philadelphia and concentrated on exhibitors in Pennsylvania.[8] Another instance of all three Merriwell features listed jointly was again in the Moving Picture World magazine, in July of ’13, in an advertisement by the M & F Feature Film Corporation of Chicago; this distributor focused on exhibitors in Wisconsin and Illinois.[9] Prince Feature was a very active partner in distribution of the Merriwell films, far outnumbering showings in Pennsylvania as compared to Illinois or any other state for that matter. This was in part due to the fact that Prince was early to game, having picked up the first title in the series in New York on January 2, 1913;[10] Prince began their marketing campaign for Merriwell in the January 11, 1913, edition of Moving Picture World.[11] This quickness to Merriwell most probably stemmed from the newness of Prince, having just started business;[12] it seems that all parties involved in Merriwell from production to distribution were newbies. 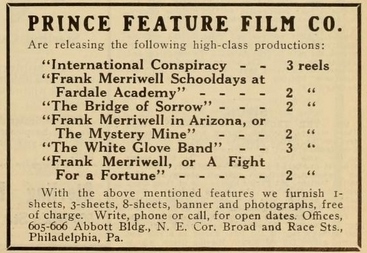 What does not fit into this series is the title (I have found only one reference to it), Frank Merriwell in Russia, which was released in July or August of, 1912.[13] Possibly, the Russia installment was unauthorized or this first Merriwell picture did well enough at the box-office to warrant Tip Top Films to plan a series; yet all of this is conjecture and I will spend no further words on Frank Merriwell in Russia except to say this film is obviously lost.

The officially proclaimed “first” in the Merriwell series was Frank Merriwell’s School Days at Fardale Academy (AKA: Fairdale);[14] the Fardale picture was released on December 30, 1912.[15] Fardale was seen at many theaters after The Mystery Mine (number two in the series), and was supposed to have contained quite a bit of comedy. The plot for Fardale highlighted the “stirring incidents” of Merriwell at the academy, in particularly, a meeting with a “mad-dog.”[16] 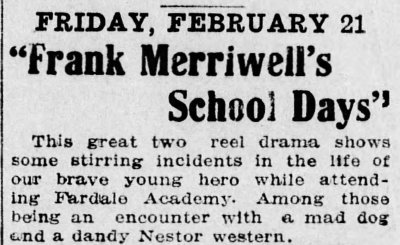 Frank Merriwell in Arizona; or, The Mystery Mine, was released on Monday, January 13, 1913 (some ads mistakenly had it as January 3, 1913; this was rectified in late January in Billboard [17]), and referred to as the second in the series;[18] this would actually be the third release, if considering Russia as number-one of the Frank Merriwell titles. While most sources consider this installment lost, it is indeed available curtesy of, EYE the Film Institute of the Netherlands; the print of Frank Merriwell in Arizona or The Mystery Mine, is in good shape.

Frank Merriwell or Fight for a Fortune, AKA, Hunt for a Fortune opened in the latter portion of February, 1913, and was billed as the third and final installment of the Merriwell pictures.[19] The first and third installments of the Merriwell series are lost in history; how, when and where could remain permanently unanswered. And so ended the initial attempt to capitalize on the extremely popular character of Frank Merriwell on the silver screen; it would be more than twenty years before Hollywood would come calling for the name of Merriwell. 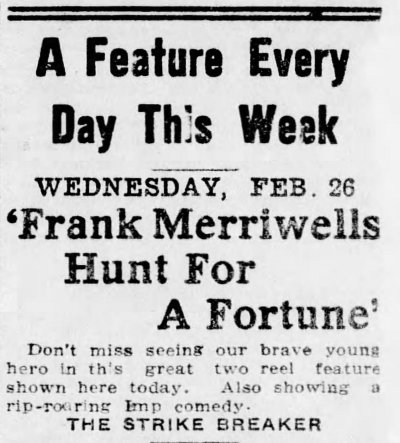 Of such little effect, nor evidently any artistic merit, the above mentioned Merriwell pictures were quickly forgotten. By December of 1916 there appeared to be no popular knowledge that any of the Street & Smith-Gilbert Patten stories had ever been filmed. This assumption is built upon a column, in the Picture-Play Magazine section known as, The Picture Oracle (movie question and answer department), where the columnist replies: “Haven’t heard of any of the Frank Merriwell stories being filmed as yet.”[20] What is oddest about this glaring omission in the Picture Oracle column is that Picture-Play Magazine was a Street & Smith publication.