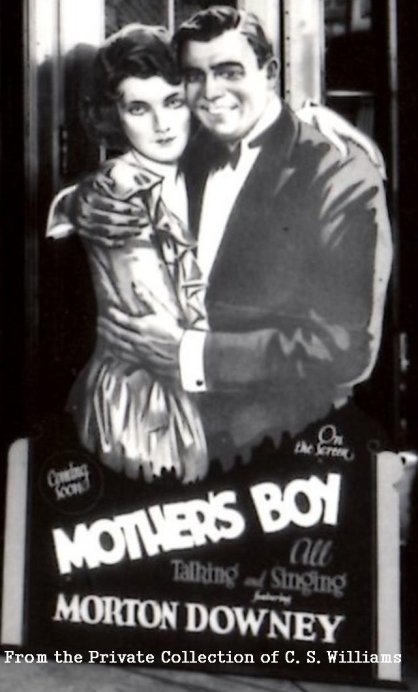 Mother’s Boy strangely enough, received its copyright from the Library of Congress on May 19, 1929, and was listed as an eight reel (82 minutes) film with the Copyright Office. Not to leave my ‘strangely’ remark unexplained, I find it odd since Mother’s Boy had its world-premiere on Thursday, April 11, 1929, in New London, Connecticut,[1] with star Morton Downey making an appearance at the debut, being a favorite Nutmegger son (Downey was born in Wallingford, Connecticut); many cities saw the film before it was copyrighted. The opening for Mother’s Boy was staggered, common for that era (although this would soon change; see our post on The Love Parade, for further information on the advent of simultaneous release) with another grand-opening in Buffalo, New York at the Great Lakes Theater, with a midnight showing on Friday, May 3, 1929.[2] In New York City the premier of Mother’s Boy was held at the George M. Cohan Theater on Tuesday, May 7, 1929;[3] the all-talking, all-singing musical saw a more general release nationally, beginning on Sunday, May 12, 1929, on that all important maternal holiday, the one, and the only: Mother’s Day.

More theaters were added to the Mother’s Boy play-list in the coming weeks leading up to the summer of 1929 and throughout autumn and beyond. Mother’s Boy Premiered May 20, 1929 in London at the Palace Theatre;[4] it was the first talkie shown at the Albion Cinema in North Shields, England, on September 16, 1929,[5] and on August 22, 1929, the Pathé musical celebrated the grand opening of the newly constructed Music Box Theatre in Chicago, ILL.[6] As well Mother’s Boy was part of the Hoyts Talking Pictures Road Show in the rural areas of Australia.[7]

By in large Mother’s Boy was panned by the critics, with but a few positive remarks to its legacy; Morton Downey (starring in his second film, his first was Syncopation, March of 1929) himself made a quick exit at the premier.[8] Most of the lustrous comments clearly came from the Pathé publicity department extolling the virtues of Mother’s Boy in newspaper ads across the country. The majority of the advertising hype was based on (rightly so) the talent and golden tones of Morton Downey’s tenor voice. Downey was a successful recording artist; soon to be radio star. One only has to scan the New York newspapers of the day to see that Downey was also a favorite of nightclubs and theaters in and around the Big Apple. Here is one very personal review of Mother’s Boy, contained in a portion of a letter from Walter to his love, Ina, on May 15 1929. As well, here is a smattering of appraisals of the value of Mother’s Boy from contemporary film-critics.

Mother’s Boy was directed by Bradley Barker; Barker was primarily an actor (eighty credits) and Mother’s Boy was his only feature-length film. Gene Markey wrote the story and the screenplay, he probably is best remembered as a producer with such films as: The Little Princess, The Hound of the Baskervilles and The Adventures of Sherlock Holmes, all made in 1939. But Markey did leave his mark in writing with pre-code releases Midnight Mary, Baby Face and Female all produced in 1933; I know, it seems he worked in torrents. Mother’s Boy was produced by Robert Kane, who is obviously much better known for Caravan, 1934, Blood and Sand, 1941, The Fighting Sullivans, 1944, and He Walked by Night, 1948.

Cinematographer Harry Stradling Sr. handled the photography, but Mother’s Boy was just picture number thirteen in a one-hundred-thirty-eight film career. Stradling photographed several classic Hollywood movies and we see his handy-work in: Suspicion, 1941, The Picture of Dorian Gray 1945, A Streetcar Named Desire, 1951, and My Fair Lady, 1964. Musicals seemed Stradling’s forte, yet, he clearly was not confined by genre, for in his résumé we find rather a large pool of dark and brooding films, of which I will make mention of  two: Tension, 1949 and The Dark at the Top of the Stairs, 1960. In addition Walter Strenge (B-movie career and TV work) and Philip Tannura (another B-film cinematographer and a lot of TV) had credits for cinematography for Mother’s Boy. The film-cutting was by Edward Pfitzenmeier who really never rose above B-pictures rank. Clark Robinson designed the sets; Robinson’s best work was seen in Way Down East, 1920 as the set-builder and in the same year Dr. Jekyll and Mr. Hyde, for which he received no credit for his art direction. And now to the sound… which was atrocious.  This sound dishonor goes to sound recording engineers V.S. Ashdown and  J.A. Delaney; needless to say neither found jobs a-plenty in the industry after Mother’s Boy. It is clear from other musicals of the time that the sound work and equipment was at the bottom of the curve compared to some of the other studios. For both Ashdown and Delaney, their careers where short, and apropos is that each man would work on Morton Downey’s next film: Lucky in Love, 1929. So much for Pathé’s sound-quality for their first all-talking, all-singing film. By the by, you may hear first-hand, with the following MP3 links, the recording-worthiness and the vast difference between the I’ll Always Be Mother’s Boy album entry and the Exploitation Record of Mother’s Boy taken from the movie. Also prior to the endnotes for this article I have included a list of the songs found in Mother’s Boy along with their authors and who sung what and the three more MP3 files… enjoy!

As we take a look at the cast of Mother’s Boy we see a slate of stage performers and singers; here is the Full Cast for our Mother’s Day film extravaganza with a short bio of each:

Morton Downey (Tommy O’Day, our hero) would have a short lived film career; of course his claim to fame was his voice, which was considered golden; he was a recording and radio star. Downey married into the Bennett acting family when he and Barbara wed. His son Morton Downey Jr. made talk-show history with his loud and often obscene rants.

Beryl Mercer (Mrs. O’Day, the Mother in question) made her name playing motherly characters, with some classic and near classic movies under her acting belt, with All Quiet on the Western Front, 1930, The Public Enemy, 1931, Berkeley Square, 1933 and The Little Princess in 1939. By the way, Mercer appeared in almost twenty Broadway productions.

John T. Doyle (Bart O’Day, father of the O’Day clan) only made three film appearances but was in sixteen productions on Broadway from 1921 and the early 1934.[9] He and his wife Marion worked often in vaudeville, enacting sketches written by Doyle.[10] 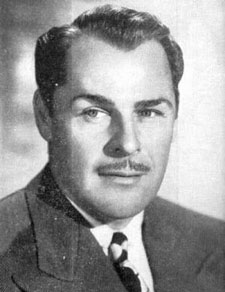 Brian Donlevy (Harry O’Day, the handsome bad-brother) was on Broadway for more than fifteen plays[11] before his film acting career really took off. Side note: Donlevy and Robert Gleckler both were in the 1928 production of Ringside for thirty-seven performances at the Broadhurst Theatre, in New York City.[12] Donlevy is best remembered in film for his turns in Wake Island, 1942, Hangmen Also Die, 1943, and Kiss of Death, 1947.

Helen Chandler (Rose Lyndon, the young lovely neighbor that both O’Day brothers are interested in) had a very successful run on Broadway, with nearly thirty plays on her résumé starring in such vehicles as: Hamlet, 1925, The Marriage Bed, 1929, and Pride and Prejudice, 1936. In 1930 she made the film Outward Bound in the role of Ann, later reprising her characterization on Broadway in the 1939 revival of Outward Bound, directed for the stage by Otto Preminger.

Osgood Perkins (Sturmberg, manager of the nightclub and the violinist) appeared in Scarface, 1932 and Gold Diggers of 1937, 1936. Primarily Perkins was a Broadway actor best known for his portrayal of Walter Burns in The Front Page, 1929; his son was actor Anthony Perkins.[13] 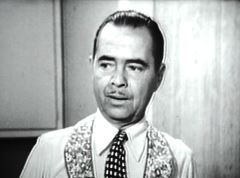 Lorin Raker (Joe Bush, the press agent) yes he had a few roles on Broadway too, but is best known for his near 120 (mostly uncredited) film appearances.

Barbara Bennett (Beatrix Townleigh, the good-girl) was the daughter of stage and film actor Richard Bennett, sister to actresses Joan and Constance Bennett. Bennett appeared on Broadway in two plays separated by nineteen years: The Stork, 1925 and Victory Belles, 1944.[14]

Jennie Moskowitz (Mrs. Apfelbaum Proprietor of the East Side Delicatessen) was a Yiddish theater actress, well known on the Yiddish theater circuit.[15] Moskowitz appeared in the pre-Broadway run of Mendel, Inc. by David Freedman.[16]

Jacob Frank (Mr. Apfelbaum Proprietor of the East Side Delicatessen) also was a part of the Yiddish theater circuit, as actor and director, well known in Philadelphia, Cleveland, Boston, Detroit and Chicago. Frank acted with Paul Muni on stage in The Four Walls.[17] He had his few turns on Broadway.[18]

Louis Sorin (Mr. Bubmle) was better known on stage, finding a thirty year stint on Broadway,[19] including: Humoresque, 1923, The Constant Nymph, 1927, The Marx Brothers’ show, Animal Crackers, 1929, The Night Before Christmas, 1941 and The Madwoman of Chaillot, 1950. Sorin did reprise his stage role of Roscoe Chandler in the film version of the Marx Brothers’ comedy-musical, Animal Crackers in 1930 and had a leading part in the 1950 film, With These Hands, which featured several other well-known Broadway actors. 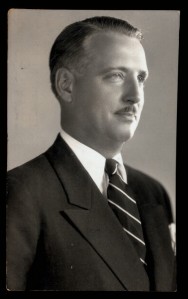 Robert Gleckler (Gus LeGrand) was another Broadway veteran with sixteen appearances on The Great White Way,[20] while adding more than fifty film roles to his credit, including Alexander’s Ragtime Band, 1938 and They Made Me a Criminal, 1939.

Tyrell Davis (Duke of Pomplum, nightclub regular) saw a total of 173 performances in two plays on Broadway, eighty in 1926 and ninety-three in 1929; rounding out his acting profile with thirty-eight film roles, his celluloid work beginning in 1929 and ending in 1938.

Allan Vincent (Dinslow) had a nickel’s worth of Broadway roles and two-bits of film appearances, with Mystery of the Wax Museum, 1933, and Daring Daughters, also in 1933, being his most noteworthy.

Leslie Stowe (the Evangelist at the Mission) began his career on stage in 1893 making his debut in the comic opera Ship Ahoy,[21] appearing through the years in the tour of The Merry World,[22] yet another tour company production, this of The Student Prince,[23] and Barbara Fritchie.”[24] He also had roles on Broadway in Klaw & Erlanger’s production of “Ben Hur,”[25] 1917, Ned McCobb’s Daughter,[26] “Pasteur,” 1923, “Go West Young Man,”1923, and “Babes in Toyland,” in 1931.[27] Stowe acted with Edwin Booth (yes, the older brother of John Wilkes Booth, the assassin of President Abraham Lincoln), Lawrence Barrett, the Shakespearean Repertoire Company of Sothern and Marlow,[28] and William Gillette,[29] (in Sherlock Holmes as Moriarty) along other notable actors of the aforementioned eras. Stowe was 45 when he made his film debut in 1912, making just 30 films; his most notable performances being in Bolshevism on Trial, 1919, and The Seventh Day, 1922. 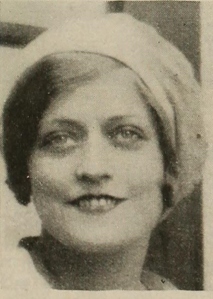 Mildred Hunt (sang two of the songs in the nightclub scenes)[30] and was considered “Radio’s Sweetheart;”[31] she introduced the popular waltz, “When Your Hair Has Turned To Silver” on radio.[32] Hunt recorded with Tommy and Jimmy Dorsey, “Ho-Hum” and “Would You Like To Take A Walk?”[33]

I was Not So Particular, (Downey) by Jack Val, Bud Green & Sam H. Stept

There’ll Be You and I (Downey Twice) by Bud Green & Sam H. Stept

There’s a Place in the Sun for You, (Downey) by Music Sammy Fain, Lyrics by Bud Green, Bud Green & Sam H. Stept

The World Is Yours and Mine, (Downey) by James F. Hanley, Bud Green & Sam H. Stept

What’s the Use of Repining (Downey)[36] (traditional arrangement)

The following was a dance number:

Here are some examples of the advertising for Mother’s Boy and other memorabilia: 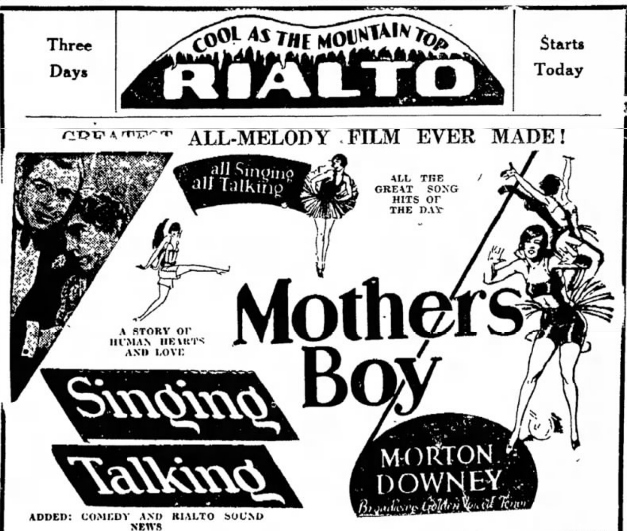 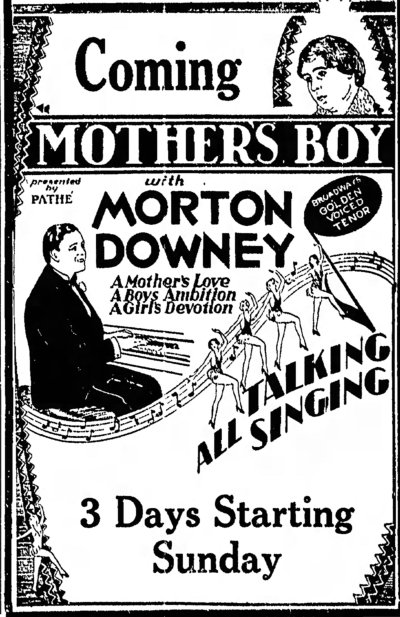 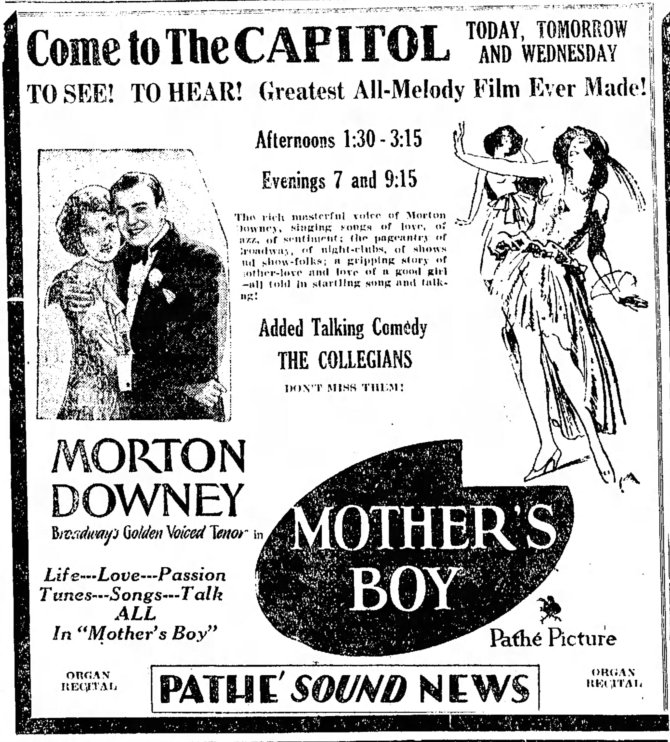 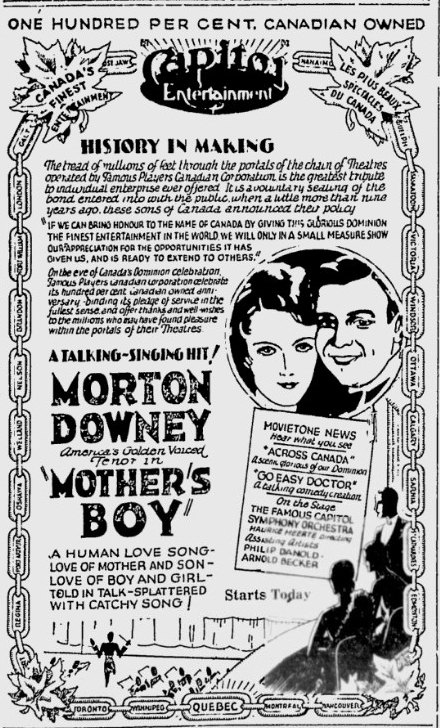 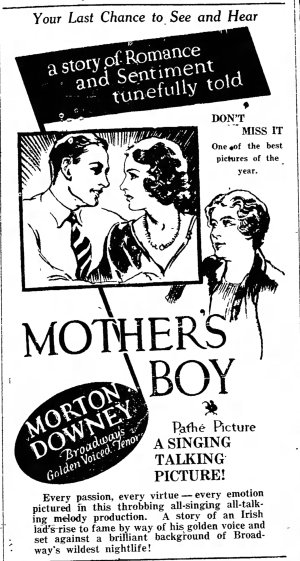 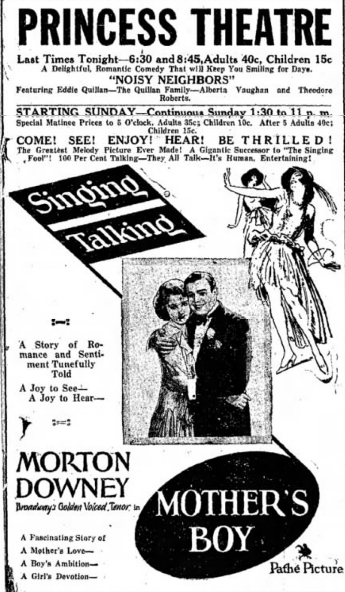 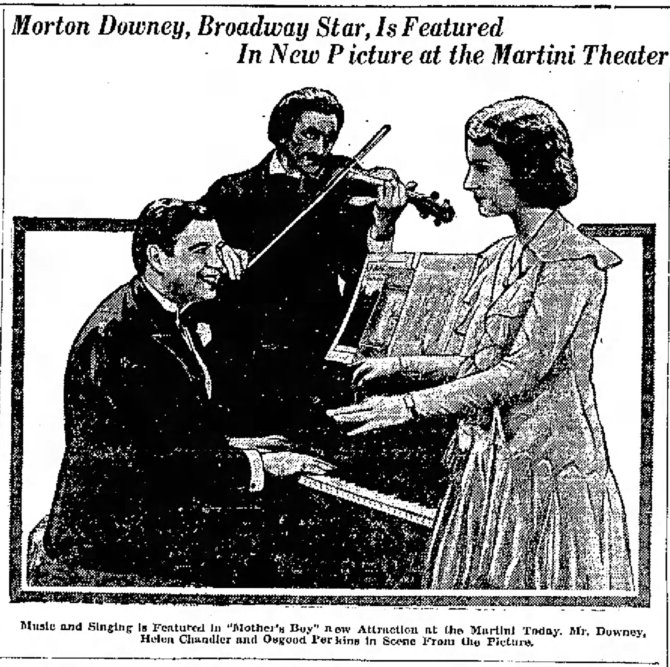 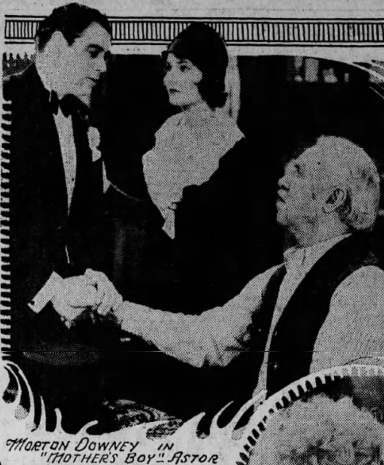 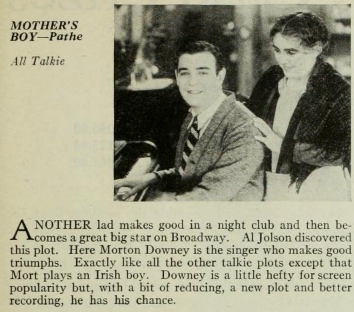 [7] Australian Screen The full program of talking movies (all from America) were: Mother’s Boy, Strange Cargo, Father and Son, Show Boat, Kitty and Tonight at Twelve.

[17]  Lives in the Yiddish Theatre

[25] It  was reported (Pittsburgh Press, Sunday, March 17, 1929)that Stowe made his mark in Ben-Hur in the role of  Sempronius, but actually, Stowe was seen most often as sheik Ilderim in the Klaw & Erlanger road production of Ben Hur from 1913-1918. Ben-Hur visited and returned to numerous playhouses throughout the Midwest and east.