Tracked by the Police was directed by Ray Enright (so many Westerns), and Edward Sowders (several films with Erich von Stroheim) was the assistant director. Tracked was written by Gregory Rogers (AKA Darryl F. Zanuck), with the screenplay by Johnnie Grey (tons of short-subjects and a load of Harold Lloyd films), cinematography by Edwin B. DuPar (no genre could tie him down), editing cuts made by Owen Marks (he would work on some of Hollywood’s best known productions: Casablanca, 1942, The Treasure of the Sierra Madre, 1948, White Heat, 1949 and East of Eden, 1955). The film starred the wonder dog, Rin Tin Tin and his girl, Nanette the Dog; did I mention Jason Robards Sr. (one B-Movie after another) and Virginia Brown Faire[1] (many Westerns fair and better)? Consider them mentioned, although both were billed below the great Rin Tin Tin, but above Nanette.

In September of 1926 the novelization of, Tracked by the Police, appeared in a few newspapers across the country; William B. Courtney, best known for his scenario, for the Vitagraph production of, Black Beauty, in 1921, was responsible for book. Copies of this “photoplay” can still be found for as little as $20.00 and as much as $300.00 for a first edition. 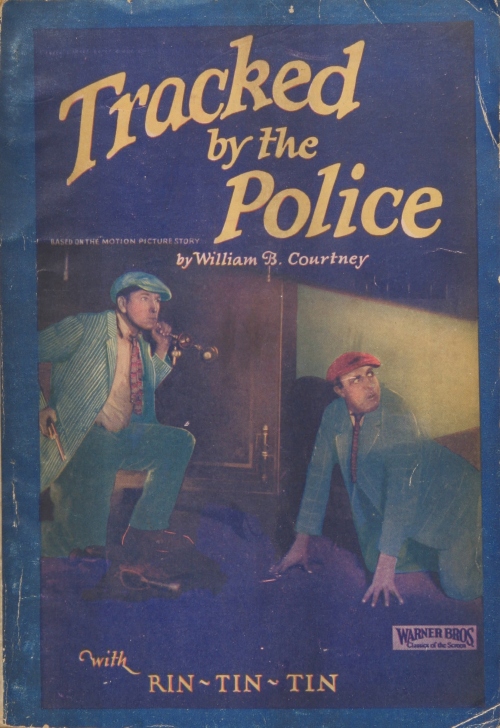 Tracked by the Police Rin Tin Tin photo and description from The Western, From Silents to Cinerama By George N. Fenin and William K. Everson, The Orion Press, New York, 1962

Rin Tin Tin (on the right) and Nanette

[1] Not only was the name Brown sometimes spelled Browne, also, Faire and Brown occasionally would be interchanged.